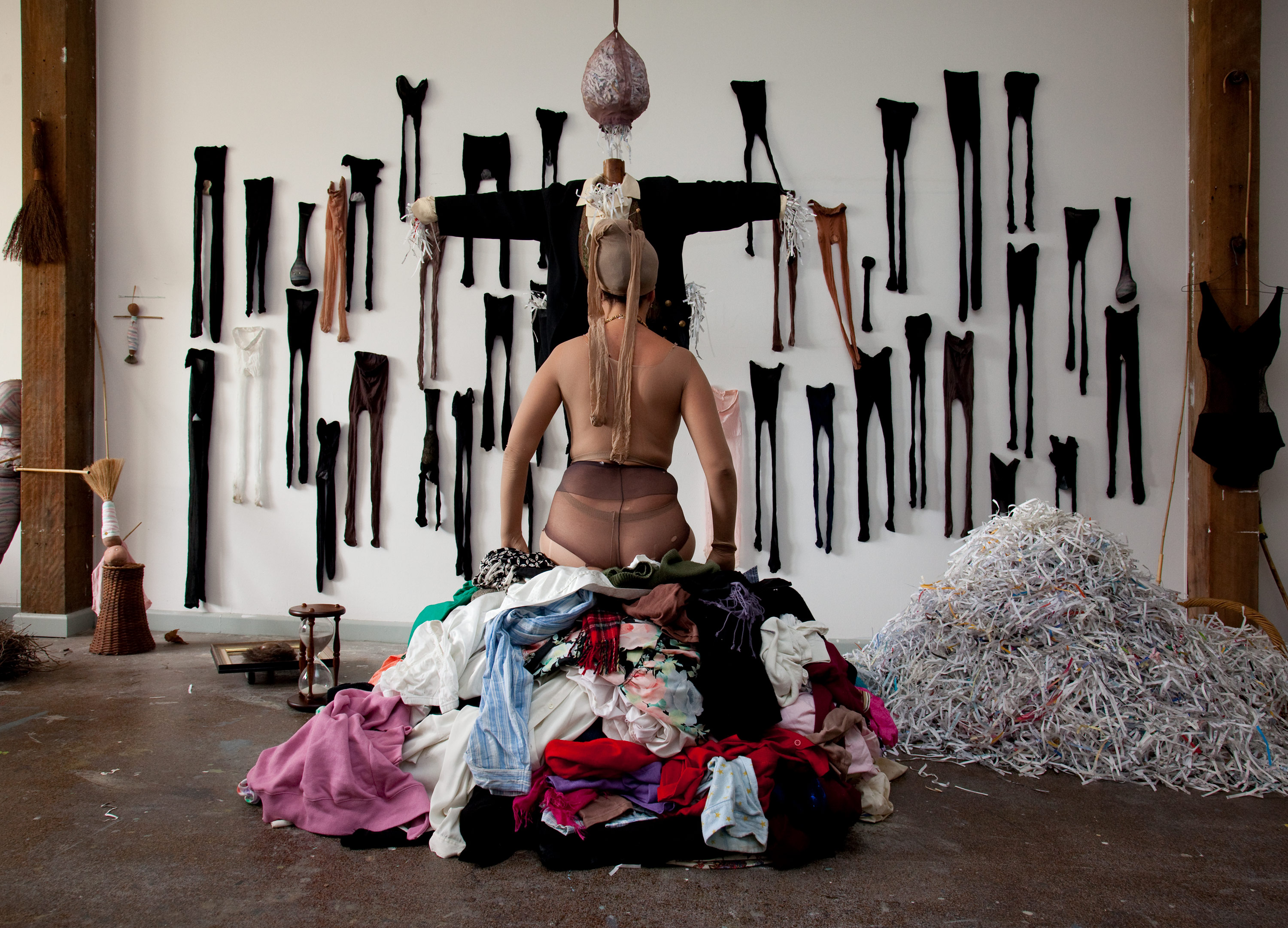 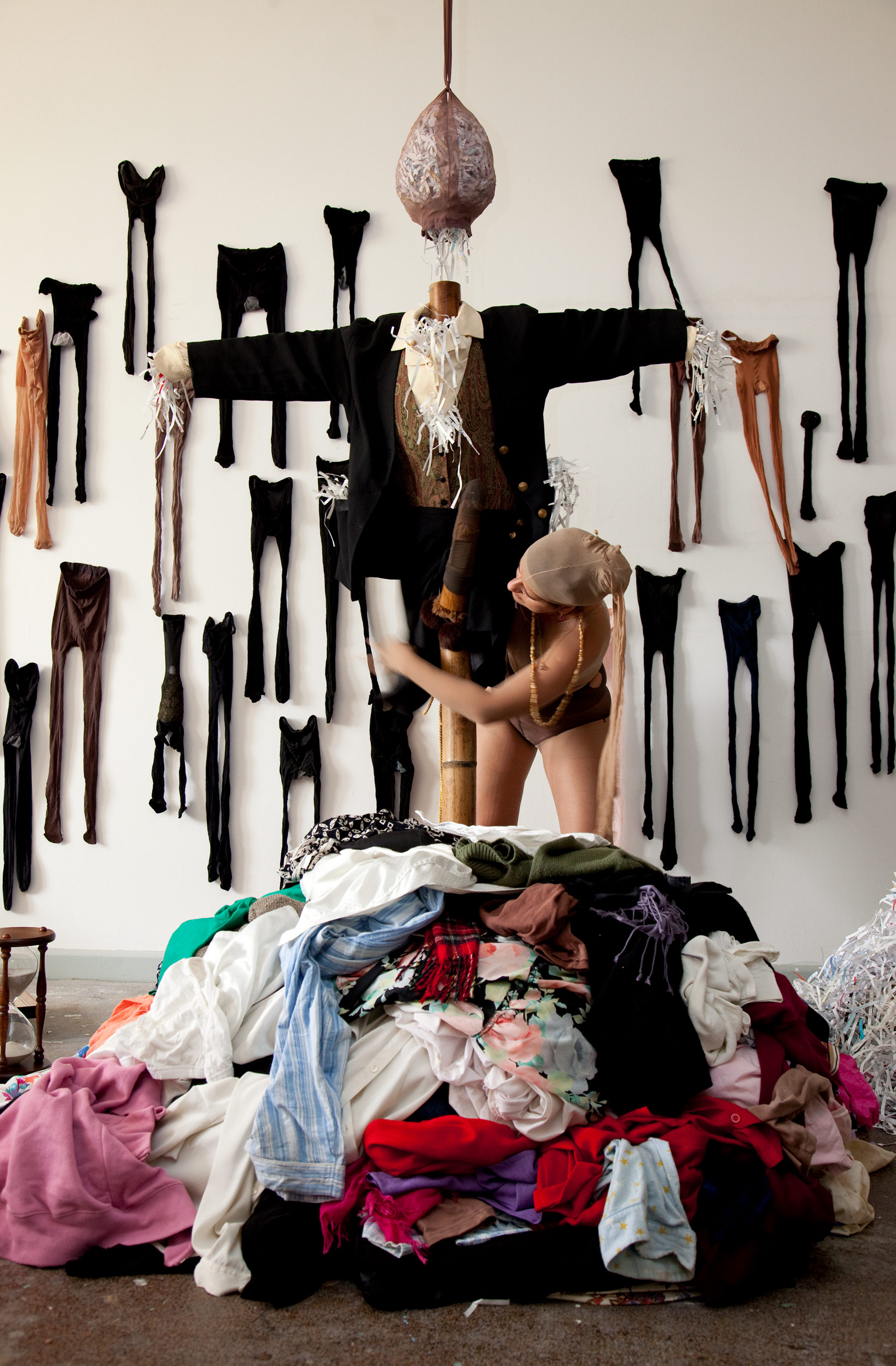 When I was growing up my Mother told me stories of my time in Italy, we were both born in the same town Sarteano, in Tuscany. She was there to remind me of my childhood and affirm my dreams. When I was a child I wondered what it would be like to meet everyone in the whole world. I believed the news reader was a small person that lived inside the TV and that whales were larger than the Earth itself. I spent a lot of time playing alone in my room, here I was free to imagine. 20 years have passed since becoming an artist. I have used almost everything I own including myself in my artwork. Upon reflection, my work tells an authentic story of my life. I use poignant material within constructed imagined spaces. In my early works I explored my obsession with childhood. In many ways I have grown up and grown older through my work. Since my Mother and grandmother died in the last 15 months, I feel that I have lost a sense of personal history. Now, I see my work as a legacy, something I leave behind when I die. My legacy is to leave behind work that continues to educate the next generations, work they can engage with. I hope that my work continues to inspire next generations to own their stories. I aim to make a meaningful contribution to Australian art culture.

My new work Empty Stockings: Full of Love is an evolution of earlier work entitled Loved. I performed as a tap dancing rag doll. A loved toy has been discarded in a rubbish heap. It is left rummaging amongst the trash finding its way out. The toy comes back to life in the gallery space. Tap dancing to my Mother singing ‘Hello Dolly’, I made this work during the time my mother was unwell. Tap dancing in its historical context was used to uplift people’s spirit during a time of depression and destruction. In my work it is a metaphor for strength at a time of unknown during my Mother’s illness. The rag doll proceeds to knit an umbilical cord for the duration of the performance. This work was celebrated at 24/25 for the Artspace 25th Anniversary.

My Mother died on 8th December 2008. Memories of my mother are that she never had time, she was always busy at work to pay her bills. She was a hardworking single Mother. At the time of her death, I proposed to create a work as a tribute to her. My Mother asked never to be forgotten. I received funding from the Australia Council and 7 months in studio 4 at Artspace to realise the work. This work emerged out of the process of packing and sorting my Mother’s house. The process of dividing what became art and what was life. Objects from life take on stories and change in meaning over time and space. For example when a loved one dies their personal belongings take on new meaning. Their possessions become a tangible connection to the past, triggers of memories and stories.

Empty Stockings: Full of Love emerged from an authentic process of grief and facing with my own mortality. On an intimate level the work represents a portrait of my Mother, reflecting her personality, sense of humour, our connection and her commitment to supporting my dreams. She was my greatest fan. The effigies represent spirits. My effigies are in the forms of commonly known as scarecrows. They symbolise protectors of crops, guardians of the land, with reference to protecting our land as a Mother would protect her child. The central effigy represents my Mother. Dressed in her work uniform and surrounded by mounds of her clothes in a nest like formation, and mounds of shredded bills spilling out of a basket. Her empty stockings (37 pairs) pinned to the wall gently sway in the wind to songs from my childhood as a sign of absence and presence. Objects such as nest of my Mother’s hair resting on a mirror and an hourglass filled with ash belong to the installation.

The surrounding effigies represent other spirits. Made from found baskets and dressed in my Mother’s clothes. These effigies will be transported to Hill End to be photographed with my Camera Obscura and to be sacrificed in a burning ritual. This ritual will be documented with both stills and video. A highly personal work which attempts to communicate themes of life, death and rituals. 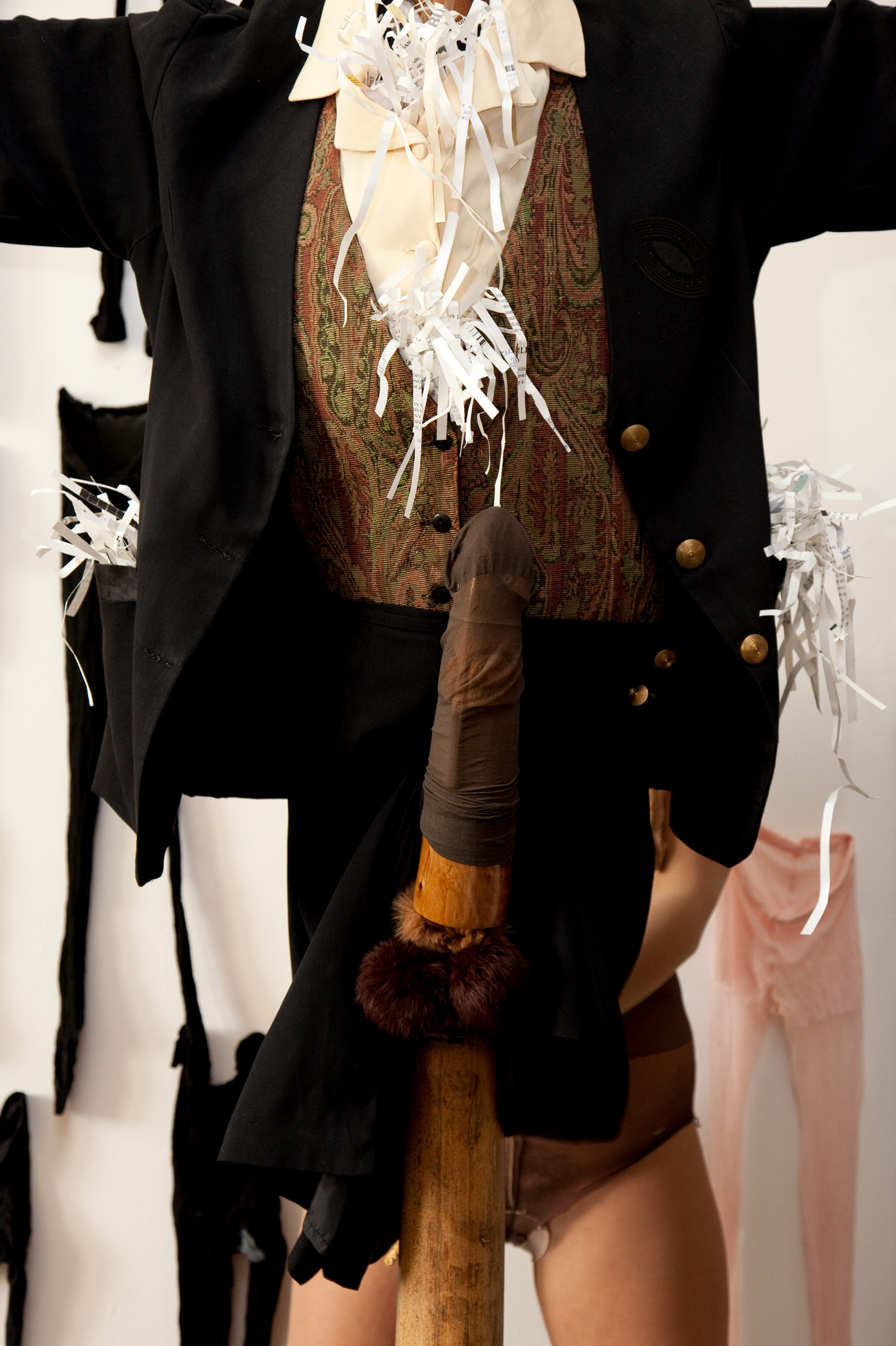 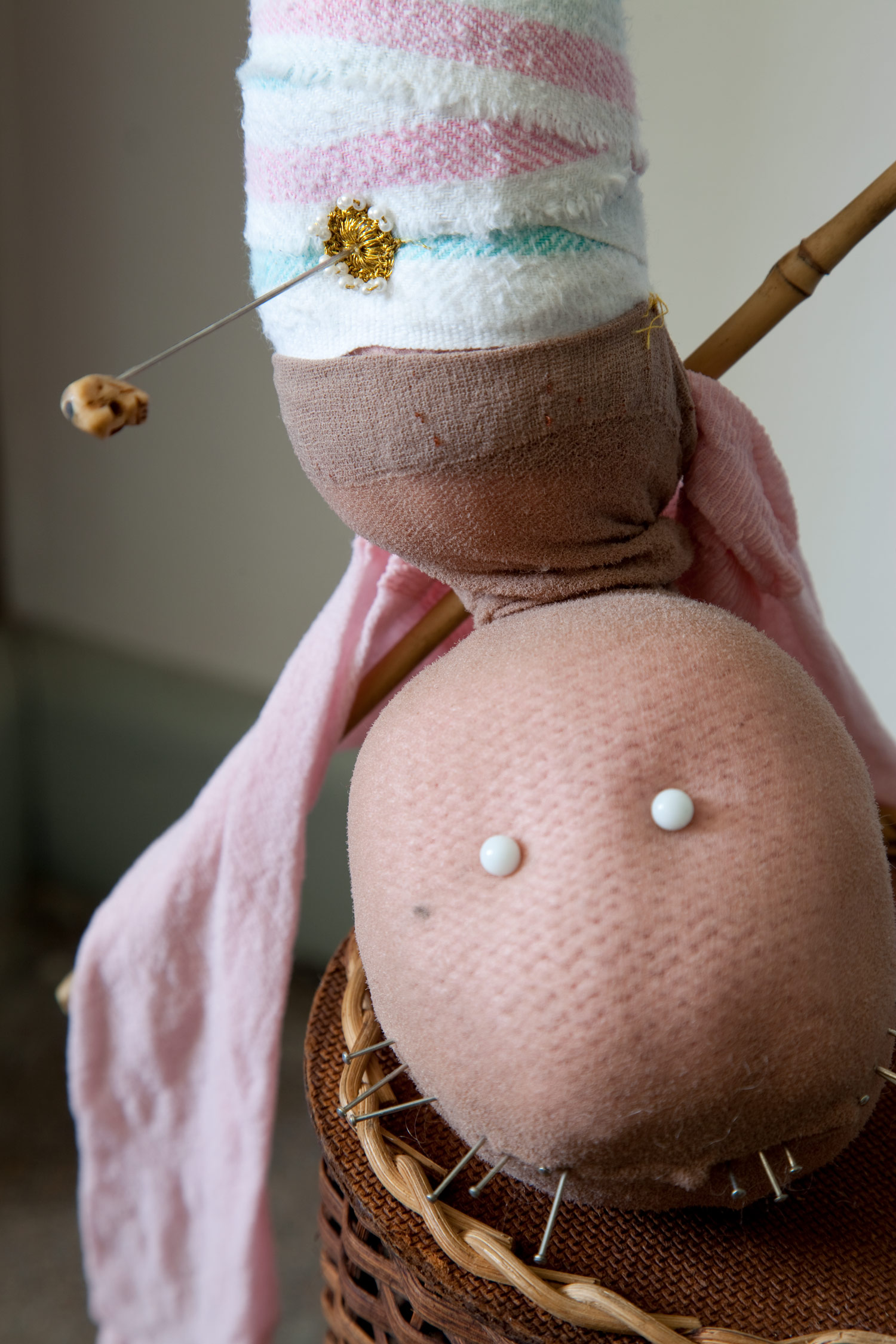 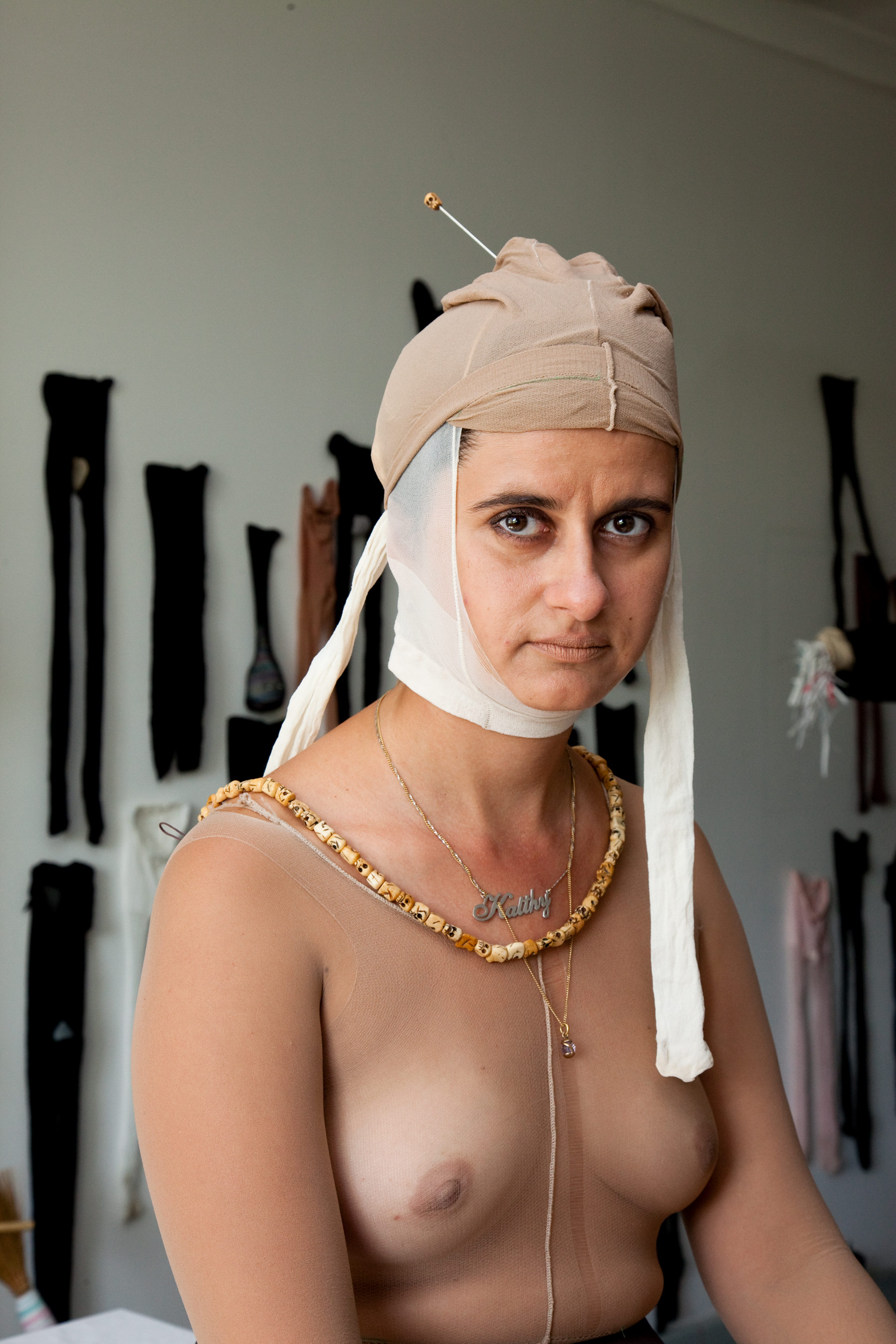 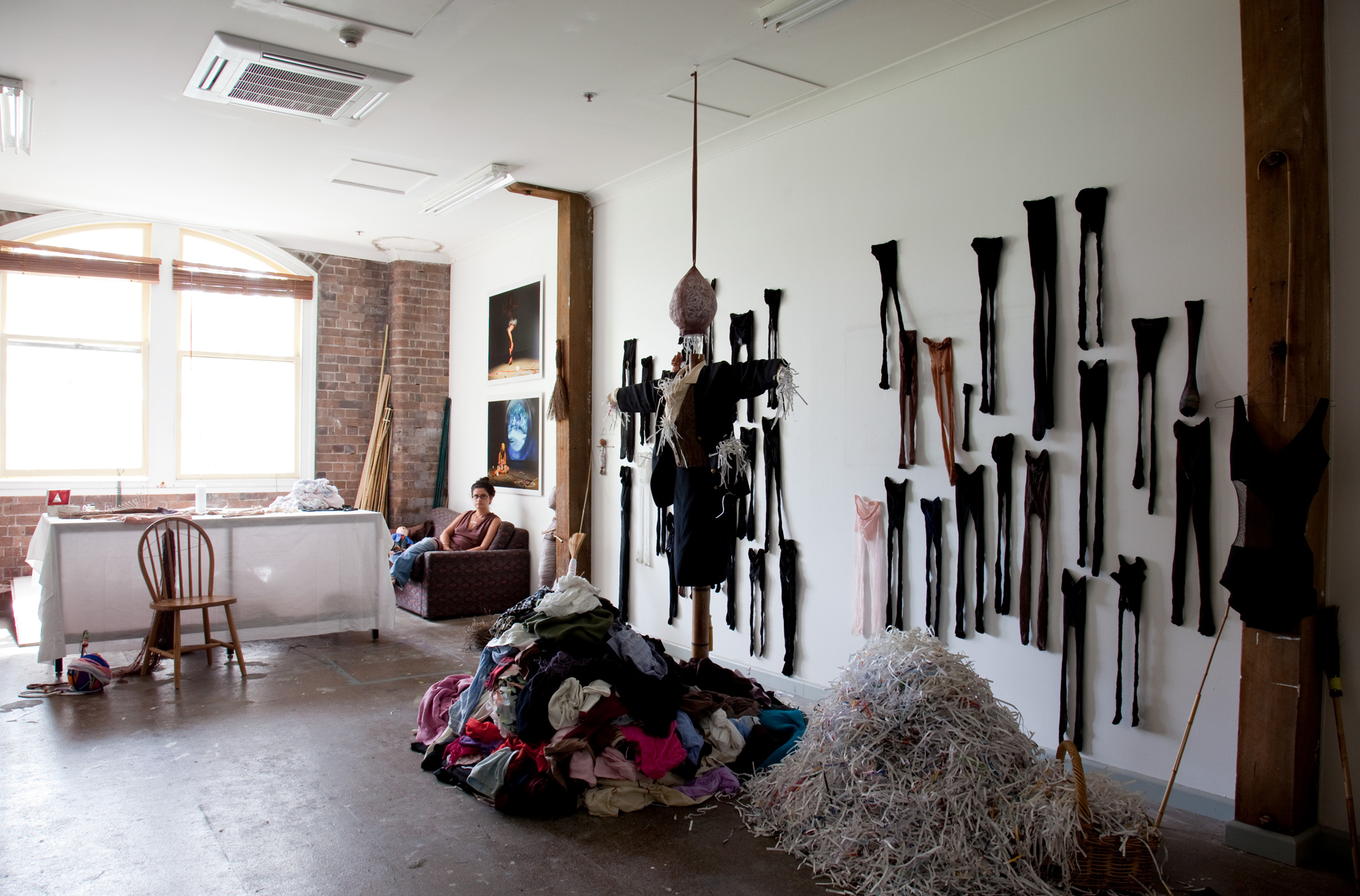